What are the key factors affecting forest biodiversity? 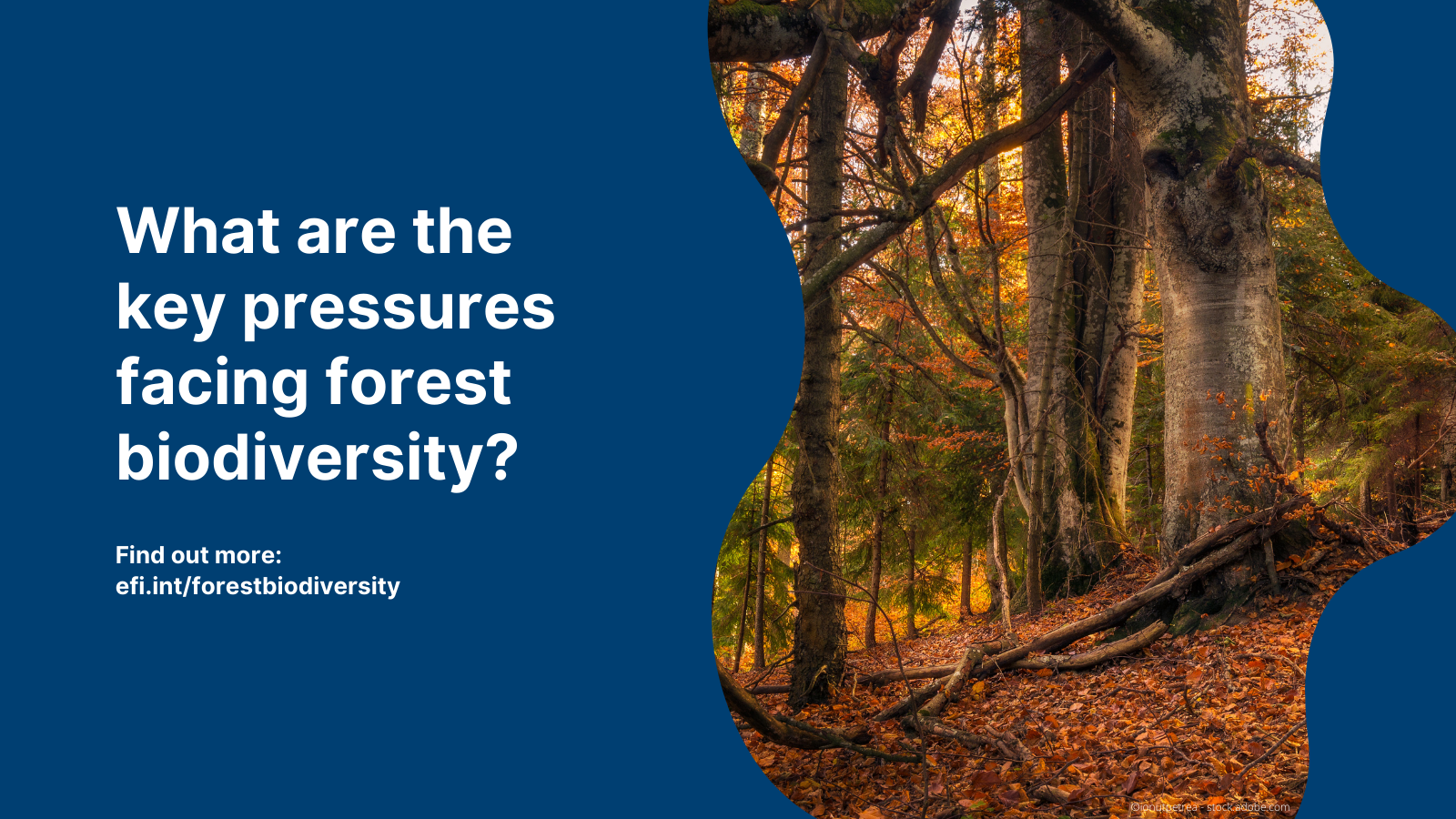 Climate change is one of the biggest current and future threats to forest biodiversity. It impacts directly on species as well as their habitats. Climate change favours species with particular traits (e.g. favouring light-coloured insects), whereas other species may be reduced in their abundance or even die out, at least locally (e.g. Bässler et al. 2013; Zeuss et al. 2014). As tree pests and diseases may also benefit from climate change, e.g. through increased winter temperature or prolonged vegetation periods, impacts on tree species will increase, what may lead to a transformation of major forest types (Hole et al. 2009). Climate change also causes shifts of species to higher latitudes and elevations, in their attempt to stay in the temperature range they are adapted to (which is often unsuccessful due to the low migration velocity of e.g. plants or soil fauna) (e.g. Rosenzweig et al. 2007, Vitasse et al. 2021). In this regard we should also consider, that species ranges and habitats cannot be freely moved across the landscape. For example, species found in the high elevations of low mountains cannot move to higher elevations as warming progresses (e.g. Barras et al. 2021). Eventually, climate change will also cause changes in the composition and functional characteristics of communities (e.g. Blondeel et al. 2020). Therefore, there will inevitably be a recombination of species in emerging communities, with little predictability for the outcome of new interactions for individual species.

Landscape fragmentation also interacts with the effects of climate change. While landscape fragmentation has always impacted species requiring large habitats, affected the viability of small, isolated populations (e.g. due to inbreeding) and can cause the extinction of populations (Fahrig 2001), range shifts driven by climate change (especially of low-mobility species) are hindered or even made impossible. Fragmentation has also been found to further reduce migration velocities (e.g. of forest floor plants) far below the migration rates that would be required to keep pace with the rate of climate change (Dullinger et al. 2015).

Long distance drift of pesticides from agriculture. A much-cited recent study showed that there is an alarming recent arthropod decline in forests, similar in magnitude to that observed in agriculture. This study showed that arthropod decline in forests was not related to forest management intensity but to the management in the surrounding landscape. It is not entirely clear what is causing this decline, but a likely explanation is the wide-spread use of agrochemicals (see e.g. Seibold et al. 2019).

Wildlife damage. Ungulate populations (e.g. deer) have strongly increased in European forests over recent decades due to several factors. This causes heavy damage and often mortality through browsing and fraying (rubbing the antlers against the stem of young trees) to young trees, particularly of broadleaved and some native conifer tree species. This is a huge problem not only for dependent species, but also in the light of climate change adaptation, for which more of the currently rare tree species particularly susceptible to browsing are needed (e. g. Kunz et al. 2018).

Biological invasions are seen as a major driver of biodiversity loss worldwide, including in forests (Liebhold et al. 2021) and cause damage through parasitism, competition with native species, physical changes of the environment, and pathogen transfer (Riccardi et al. 2013). The globalization of trade and travel continues to increase the spread of non-native species (Hulme 2021). In particular, invasive pests and pathogens such as those that cause Dutch Elm disease or Ash dieback can trigger extinction cascades for all the other species that depend on these tree species (e.g. Hultberg et al. 2020). Interactions with climate change are likely to worsen the impact of introduced pests and diseases on European forests (Seidl et al. 2018).

Because of the differing demands, specialisations and connections of the myriad of forest dwelling species, no one-size-fits-all solution for optimising forest biodiversity exists, but forest heterogeneity across the landscape is key to host a high diversity of species. Therefore, depending on the circumstances and the forest management approach (e.g. coppice forest vs. whole tree harvesting) synergies and trade-offs between e.g. bioenergy production and biodiversity enhancement will vary. Some major forestry-related pressures internal factors influencing forest biodiversity include:

Loss of old growth-forests, which harbour unique structures with their plentiful associated species. This is a process that is unfortunately ongoing in some eastern European countries and parts of Northern Europe. However, in the majority of Europe, forest structures are getting more mature, and thus offer opportunities to (actively) restore old-growth habitats (see e.g. Sabatini et al. 2020).

Loss of ancient forests that are characterised by long-term forest continuity, with associated species that need this long forest continuity to colonize the area (Hermy et al. 1999; Janssen et al. 2019). Although these forests with unique biodiversity features are not well mapped in Europe, overall, the low deforestation rates in Europe keep them currently well conserved. However, intensive forestry methods including monoculture management, stump extraction and soil preparation pose a threat to these values.

Loss of historical forest management systems such as coppice, coppice with standards (coppice forest with some trees allowed to grow large) and silvo-pastoral systems. Many forest dwelling species that are rare and red-listed today actually depend on more open and heterogeneous forest conditions, which were historically maintained through a diversity of forest and agroforestry management systems characterised by high anthropogenic disturbance levels. These transitional systems have been largely abandoned and replaced, either by more intensive and homogenous agricultural production systems or by closed high forests. Therefore, more open forests are today often the focus of nature protection (see e.g. Bengtsson et al. 2000). The current ongoing massive land abandonment in southern and eastern Europe is a big concern for these forest management-dependent conservation values. Utilising potential win-wins between circular bioeconomy development, fire prevention and biodiversity conservation has been proposed to reverse this trend (Varela et al. 2020).

The increasing growing stocks in European forests do not necessarily lead to an increase in biodiversity. While some species benefit from older forests with more biomass, other species that require more open and light conditions are clearly disadvantaged. This shows that strict protection of forests is not helpful as a universal solution, and a more tailored legacy-based approach to biodiversity conservation in European forests is needed (Van Meerbeek et al. 2019). This also applies to strict forest reserves, where in the first decades following cessation of harvesting (and hence owing to the lack of disturbances) the habitat quality for species requiring more open conditions and high structural diversity can decline (e.g. Braunisch et al. 2019; Neff et al. 2021). Also, the much praised close-to-nature forest management (continuous cover forest management) leads to denser forests where such light-demanding species decline in abundance (Bauhus et al. 2013). This may lead to potential negative consequences on dependent herbivores, which becomes a particular issue if continuous cover forestry is promoted across large landscapes as an optimal solution (compare e.g. Schall et al. 2018).

Replacement of native forests by homogeneous (conifer) plantation forests has certainly led in the past to much habitat loss. However, this is in most parts no longer occurring and we actually see an opposite trend in most parts of Europe, where restoration and conversion of conifer plantations leads to more mixed species forests and natural habitats. This process is currently accelerating through the wide-spread drought damage in these plantations (Schuldt et al. 2020).

Increased wood removals, often connected to bioenergy production. There are many European countries in which harvest levels are considerably lower than the current wood increment and where therefore more intensive forest use may be considered to provide more resources for a forest-based bioeconomy (Bauhus et al. 2017). If the additional biomass extraction includes the removal of residues (harvesting slash and stumps) or whole trees, not only nutrient depletion of these stands becomes an issue, but also deadwood-dependent species may be negatively affected (Bouget et al. 2012).