New European circular bioeconomy strategy has to be mainstreamed

How we mainstream the implementation of the circular bioeconomy strategy was the focus of a ThinkForest seminar which took place in Brussels on 7 November. 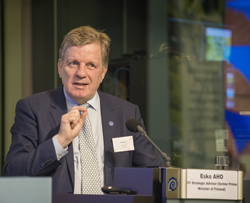 John Bell, Director for Bioeconomy at DG Research and Innovation said there would be a mainstreaming of the development of the bioeconomy over the next year, and its embedding in other policies. “Bioeconomy can reach parts of society and economy that other policies can’t reach”, he said.

Former Prime Minister of Finland and EFI Strategic Advisor, Esko Aho, analysed what we can learn from previous radical innovations in Europe, for example mobile phone development. We need to create the ecosystem, he said. It’s not about individual efforts, but about how Europe develops the right concept, technologies and policies for the new context that the Sustainable Development Goals and Paris Climate Agreement imposes. Circular bioeconomy is necessary for this new global context.

EFI’s Assistant Director Lauri Hetemäki presented a new way of describing circular bioeconomy and discussed the priorities it needs to have. He introduced the recommendations from the latest EFI From Science to Policy study, ‘Leading the way to a European circular bioeconomy strategy’. Chief among these was public engagement. The creation of a circular bioeconomy narrative, particularly for urban populations, is vital, and politicians play a crucial role in this. 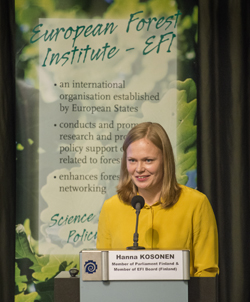 Urban populations and cities were the focus of the seminar’s panel discussions. Circular bioeconomy is the perfect tool to connect urban and rural areas to sustainable cities and communities. EFI’s Director Marc Palahí emphasised the importance of the circular bioeconomy for inclusive growth, and the forest-based sector’s ability to distribute wealth and jobs far more extensively in society than fossil-based resources. Finnish Member of Parliament and EFI Board Member Hanna Kosonen pointed out that cities were ideal for experimenting with new ideas and innovations, for example public procurement policies. Cities and regions could be the forerunners for the circular bioeconomy process. Yet, it was noted by many panellists that it was important to adapt plans to regional requirements. Common challenges included ensuring competitiveness, scaling new innovative bioeconomy products to commercial scale, and investing in R&D and new skills. The importance of communication to wider society was again emphasised.

The afternoon session focused on the role which forests play in a European circular bioeconomy. Georg Winkel, Head of EFI’s Resilience Programme presented key conclusions from a forthcoming What Science Can Tell Us study on the European forest bioeconomy. People are at the heart of a forest-based bioeconomy, he emphasised, with a growing group of urbanised forest owners providing a big opportunity to align consumer demands with producer interests. Sustainability is a key factor in engaging the population in the wider bioeconomy narrative.

The ThinkForest seminar, Looking ahead to a circular European bioeconomy’ was held at the International Press Centre in Brussels on 7 November.

From Science to Policy 5: Leading the way to a European circular bioeconomy strategy was published by the European Forest Institute on 31 October. Download the full study or the executive summary.

Managing forests in the 21st century

Managing forests in the 21st century

Governing and managing forests for multiple ecosystem services across the globe. Book of abstracts.