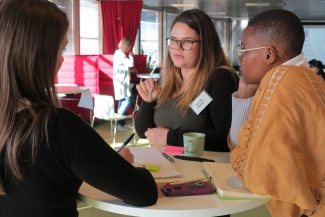 The Lookout Station, a science-media initiative of the European Forest Institute, took 18 journalists from all around the world to Helsinki with a new edition of the Solution Hack for Journalists. This 2-day masterclass combined training on the Disruptive Design Method and a field trip coordinated by Finnish Innovation Fund Sitra.

The Helsinki edition took place on 26-27 March and explored the world of circular economy and environmentally friendly business practices and product development. The masterclass focused on life cycle thinking and life cycle stages to understand how the product is made, and how it can be used, reused and disposed. Journalists also dug deeper into how Finland, a leading innovation country, is tackling climate and global challenges to build a sustainable future.

Finland is often credited as the world leader in circular economy. In 2016, Finland was the first country in the world to publish a national road map to a circular economy, created under Sitra’s lead, with an update launched in March 2019.

During the first day of the Helsinki Solution Hack, the participants were briefed on Sitra’s work related to circular economy and also on the trends forming our future. Among the topics discussed was the role of individuals and their actions in reducing the environmental impacts of every day life. One of the most popular outcomes of Sitra’s recent work has been the life style test, which has been taken over 630 000 times.

The Sitra experts pointed out that no matter what the future brings, consumption as such does not end, but rather changes as we move from owning towards using, sharing and renting. Our actions are not always motivated by environmental matters, but by ease, wellness, novelty, aesthetics, social contacts and savings, or even envy, so any change must offer better options and be a tempting part of our everyday life. The same principle holds true for those companies which are looking for better and more efficient ways to respond to the needs of the circular economy and the consumers.

On the second day, the group of journalists got to see some of the businesses in action. The first visit was to Finlayson, a textile company which started in 1820 and has in recent years implemented major changes to their operations, including different lines of products made of textiles no longer used by consumers, such as retired sheets which were turned into rag rug pieces.

Another type of retired household items found in Finnish households are mobile phones. Swappie sells refurbished phones at affordable prices, prolonging the life of the devices. This start-up has grown from a 4-person operation into a staff of 48 and made their founders visions of changing consumer behaviour true.

One of the key steps in the Finnish road map to a circular economy has been integrating circular economy into all levels of education reaching now more than 70,000 children and young people. During the visit to Me and My city the participants were able to see how sixth-graders operated in a miniature city where each student works and gets paid, they also act as consumers and citizens, learning how society functions. The model is based on the Finnish national curriculum; there is training provided for teachers, materials for 10 lessons at school and finally a visit to the learning environment. Each year, 75% of Finland’s sixth-graders are involved in the programme.

The final visit of the Helsinki Solution Hack was to Remeo, world’s first waste sorting station using ZenRobotics Recycler to sort out the different materials from construction waste. Bringing robotics into the waste management has improved the efficiency, as well as purity, which in turn increases reusability.

For photos and glimpses of the programme, check out #solhack on Twitter.