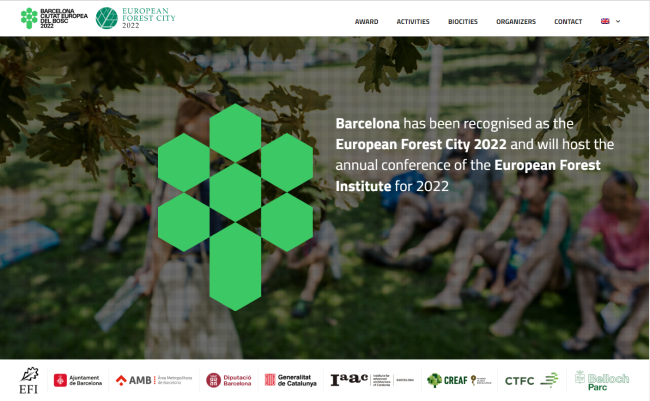 The award to Barcelona recognizes the management of the city and metropolitan area which includes conservation, protection, and development of forest areas, as well as research into a new urban model that promotes nature-based solutions. In that framework, the city of Barcelona and its metropolitan area will encourage public participation in activities related to this year’s topic of reflection: Bioeconomy for cities. How can biocities transform the way we live on the planet?

The award recognises Aberdeen’s commitment to forests and trees, as well as to forest research and education.

The four great forests around Aberdeen provide crucial environmental, social and economic benefits to its citizens. In addition, the city council has taken important actions regarding the tree coverage of the city; maintaining existing trees and plating new trees, for instance within the project “a tree for every citizen”. Aberdeen is also a recognized forestry knowledge centre in Europe thanks not only to its University but also to EFI’s member organisation, the James Hutton Institute. Read more here.

On 19 March 2018, EFI Director Marc Palahí presented the award to Francesco Pigliaru, the president of the autonomous region of Sardinia. In his speech Palahí pointed out that with the award EFI is not only recognising the efforts made by the region to support sustainable forest management but encourages Sardinia to take the lead in the future in the Mediterranean region in placing forests and forestry at the heart of sustainable development.

On 9 March 2017, EFI Director Marc Palahí presented Marianne Borgen, the Mayor of Oslo, and Gerd Robsahm Kjørven, Director for Agency for Urban Environment, with a certificate to mark Oslo's nomination as European Forest City 2017. In her speech Mayor Borgen said: "We are honoured to receive the European Forest City award. We are very proud that the forests of Oslo are being recognized."

The forests around Oslo are known by the locals as well as visitors as Oslomarka. The forests once used mainly for timber have become an important part of the everyday life of the entire community. During the winter months, the forests have more than 350 km of ski tracks with up to  10 000 visitors daily. The recreational activities vary with the seasons: hiking, picking berries and mushrooms, as well as fishing and biking are among the most popular ones.

Mayor Borgen also pointed out that Oslo is sometimes called "the blue and the green – and the city in between" because of its proximity to the Oslo Fjord and vast surrounding forests. "You can experience both the vibe of the city centre and go skiing in the forests – all on the same day. You can even get there by subway. Oslomarka is in other words a big part of Oslo's identity and this award is very much appreciated", she concluded.

Vienna is a green city, where agriculture, vineyards and forests go hand in hand within the city boundaries and form the green belt created more than 100 years ago. More than 8000ha or 18% of the urban area is covered with forests, which play a vital role within and outside the city: the surrounding Vienna Woods is a viable area for recreation of the citizens, while nature protection is actively addressed in the National Park Lobau in the Danube floodplains and in the biosphere park in the peri-urban forests. On the other side, forests owned and managed by the city are instrumental for the provision of high-class drinking water. In a growing Central-European metropolis like Vienna multi-functional forest management is essential for satisfying the various demands for forest ecosystem services.

EFI granted the title of European Forest City to the city of Vienna in 2016. The EFI Annual Conference on took place in Vienna on 22–24 September 2016.

This award recognises how St. Petersburg during its 300 years of history has always kept forests, parks and gardens as a fundamental feature of the city. Forests, parks and gardens occupy around 20% of the city’s territory and they are its most important green infrastructure, providing numerous benefits to its citizens, from scenic value to recreational opportunities and also important environmental services. Furthermore, as Director Palahí noted, "the award is also a recognition for the St. Petersburg State Forest Technical University which has been for centuries Russia’s window to Europe in forest education and research”.

EFI’s Director Risto Päivinen presented José Luis Sabas, Deputy Mayor of Bilbao with a certificate and wooden plaque on 20 March, to mark Bilbao’s nomination as European Forest City 2014. Bilbao is the largest city in the Basque Country, Spain. The region has one of the highest percentages of forest area in Europe, and a long and varied tradition of using forest resources.