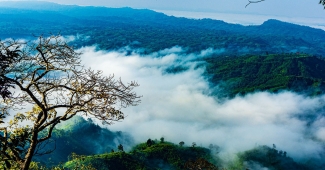 When you think of Bangladesh, you might think of the Bengali Language Movement, the longest sea beach, monsoon rain, agriculture, foreign remittance, and the textile industry, but you would probably not first think of forests. However, forests play an important role here.

To understand the important role of forests in Bangladesh, one first needs a background on forest types, tenure, and forestry in the country. Bangladesh has two major forest tenure types: government owned ‘forest land’ and privately-owned village forests. Government owned forest land covers an area of 2.58 million hectares (ha), of which 1.89 million ha is managed by the state Forest Department, and 0.69 million ha is Unclassified State Forest, administered by the District Administration of Chittagong Hill Tracts (Ministry of Environment, Forest and Climate Change (MoEFCC), 2018). Privately-owned village forests, also commonly known as ‘homestead forests’ cover approx. 0.28 million ha (ibid). The country is divided into five forest zones based on Bangladesh Forest Inventory (2015-2018) namely, i) Hill, ii) Sundarbans Mangrove, iii) Sal (Madhupur and Barind Tract), iv) Coastal and v) Village Zone (See Forest Cover Map in Fig. 1). According to the Land Cover Map-2015 prepared by the Bangladesh Forest Department (BFD), the country has 12.8% forest cover, but aims to increase the total to 15% by 2020. This is consistent with the relevant targets of 7th Five Year Plan (2016-2020) and SDGs (GoB, 2017).

Following this goal to increase forest cover, the country has shown some positive progress in reducing the rate of annual deforestation from 2.1% during the 1960-1980 time period to about 0.2% from 1990-2010 (FAO 2011). However, despite the drop in deforestation rates, the country has lost 2600 ha of forest annually from 1990-2015 (FAO, 2015).  Initially, the objective of the forestry sector was strongly oriented toward fulfilling consumer demand of forest products during and immediately after the British Colonial period. The country has since moved away from this initial objective, as the Government of Bangladesh introduced a moratorium on commercial harvesting in the 1990s and absence of a timber certification scheme limits a prominent forest economy. Instead, over the last two decades, the forestry sector has considered its role in environmental amelioration, biodiversity conservation, community livelihoods, and climate change issues.

The changes to the forestry sector’s objectives can be seen in the Forest Policy of 1994 and 2016 (draft), which indicated a commitment to sustainable forest management, addressing climate change, and conservation of forest biodiversity. Remarkably, for the first time, the Forest Policy of 2016 also emphasised the importance of a forest certification scheme. Bangladesh has also shown a commitment to conserving its forests’ biological diversity by introducing and supporting policies such as the Wildlife (Preservation and Security) Act 2012, the Bangladesh Biological Diversity Act 2012, Tiger Action Plan 2009 – 2017, and the Wildlife Crime Control Unit. The country has introduced Protected Area Management Rules in 2017, including the first co-management model which formally recognises the roles and decisions of local communities and bodies in the management process. The percent of protected area has increased from 1.81% (2013-2014) to 4.35% (in 2020) of the country’s total area (BFD, 2020). Protected areas include the world’s largest “Sundarbans Mangrove” forest, (a UNESCO World Heritage Site, with an area of 140,000 ha) located in the delta of the Bay of Bengal. The site represents an excellent example of ongoing ecological processes and ecosystem functions, and is famous for its rich flora and fauna, including the Royal Bengal Tiger. To address climate issues, the MoEFCC has prepared and established the Climate Change Trust Fund, Climate Change Strategy and Action Plan of 2009 and 2019 (updated), National REDD+ Readiness Framework, Forest Reference Emission Level (FREL), Nationally Determined Contributions, and so on.

Given the forestry sector’s recently environmentally oriented objectives, substantial amounts of development aid have been invested to assist in implementing forest policy changes in Bangladesh. Aid commitment in all sectors was US$ 62,849.57 million from 1980-2014 (Rahman et al. 2016a). Aid in the agricultural sector (including forestry, fisheries, and environment) was only 4% of the total. Nonetheless, aid in the forestry sector consisted of US$ 434.52 million, which is 17% of the total agriculture sector (ibid).

The prevalence of development aid in Bangladesh interested me and lead me to a career in research on development policy analysis. Moreover, as a Civil Servant of the Government of Bangladesh I worked mainly in the Ministry of Environment, Forest and Climate Change since 2005. My professional field of investigation primarily linked to analysing forest and climate change development policy issues. I completed my PhD at Göttingen University, Germany, from 2013-2017. My research covered a broad field of forest-related policy issues, including climate, biodiversity, community forestry, and sustainable management. Using a mixed qualitative-quantitative approach and innovative methodology, the research for my PhD found that foreign donor countries which provide funds and technical assistance cause public policy changes in Bangladesh (Rahman et al. 2016a). By performing public and print media discourse analysis, it also found that some domestic forest-related issues are closely linked with international conventions and protocols. (Rahman & Giessen, 2014).

My PhD research then further analysed who in particular gains power capabilities over the policy changes and found that donor administrations are among the prime beneficiaries (Rahman et al. 2016b; Rahman & Giessen, 2017a; Giessen et al. 2016; Sarker et al. 2017). The research also examined how forest policy changes lead to power changes (Rahman et al. 2018). It further focused on how national and international bureaucratic actors, national bureaucratic arrangements, and their funding patterns influence the implementation of climate adaptation policy in Bangladesh (Rahman & Tosun, 2018; Rahman et al. forthcoming). By analysing the spending pattern in various items of activities of development projects, the research then developed a concept of the informal interests of public bureaucracies. Informal interests are not openly displayed but are accessible and predictable. We found donor agencies, especially USAID, GIZ, and EU, enjoy a wide range of political, economic, and strategic informal interests by providing development aid funds to a recipient country like Bangladesh (Rahman & Giessen, 2017b). The research also found an indication of changing paradigm in development policy of Bangladesh, which privileges non-state actors over Bangladeshi state bureaus (Rahman et al. 2018). Our research also analysed development policy of regional (South Asian) regimes (Sarker et al. 2018, 2019). My present post doc research at EFI fruitfully takes up these observations and combines them in original, innovative, and qualitative and quantitative ways to supplement and further develop the initial findings in a deductive way. My research now expands its study areas beyond Bangladesh and includes some of the international and European nations.

MoEFCC, (2018): The submission of Bangladesh’s Forest Reference Level for REDD+ under the UNFCCC, Ministry of Environment, Forest and Climate Change, Govt. of the People’s Republic of Bangladesh, Dhaka. 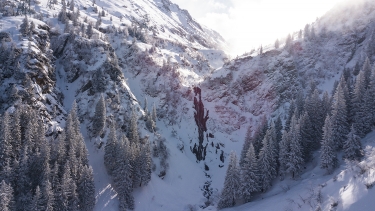 SUPERB to promote forest restoration and adaptation across Europe

Imagine you were a bird flying over Europe. You would see cities and villages, rivers, agricultural landscape, and forests covering almost one-third of Europe. You will distinguish many different
Learn more

The EU-funded ROSEWOOD4.0 project, in which EFI is participating as a consortium member, launched a new repository of best practices and innovative digital solutions with the aim of revolutionising the European forestry and wood sector.
Read more

Towards next generation forest monitoring

There has never been so much forest data compiled by so many different actors with different tools. EFI’s Scientific Seminar on 7 October highlighted how important cooperation and partnership between
Learn more
See all