How did EU-27 forests develop, and why do they differ from those of the past?

The forest resources in the EU currently cover 159 million ha or around 40% of the land area, which corresponds to four times the total area of Sweden (Forest Europe, 2020). The share in forest cover is largest in the Nordic countries with a forest cover of 74% and 69% in Finland and Sweden respectively, whereas it is as little as 11% in Ireland and the Netherlands and 1% in Malta. The average timber volume (growing stock) is 162 m3 per hectare of forest. The average growing stock varies from 60 m3 per hectare in Spain to 390 m3 per hectare in Luxembourg. 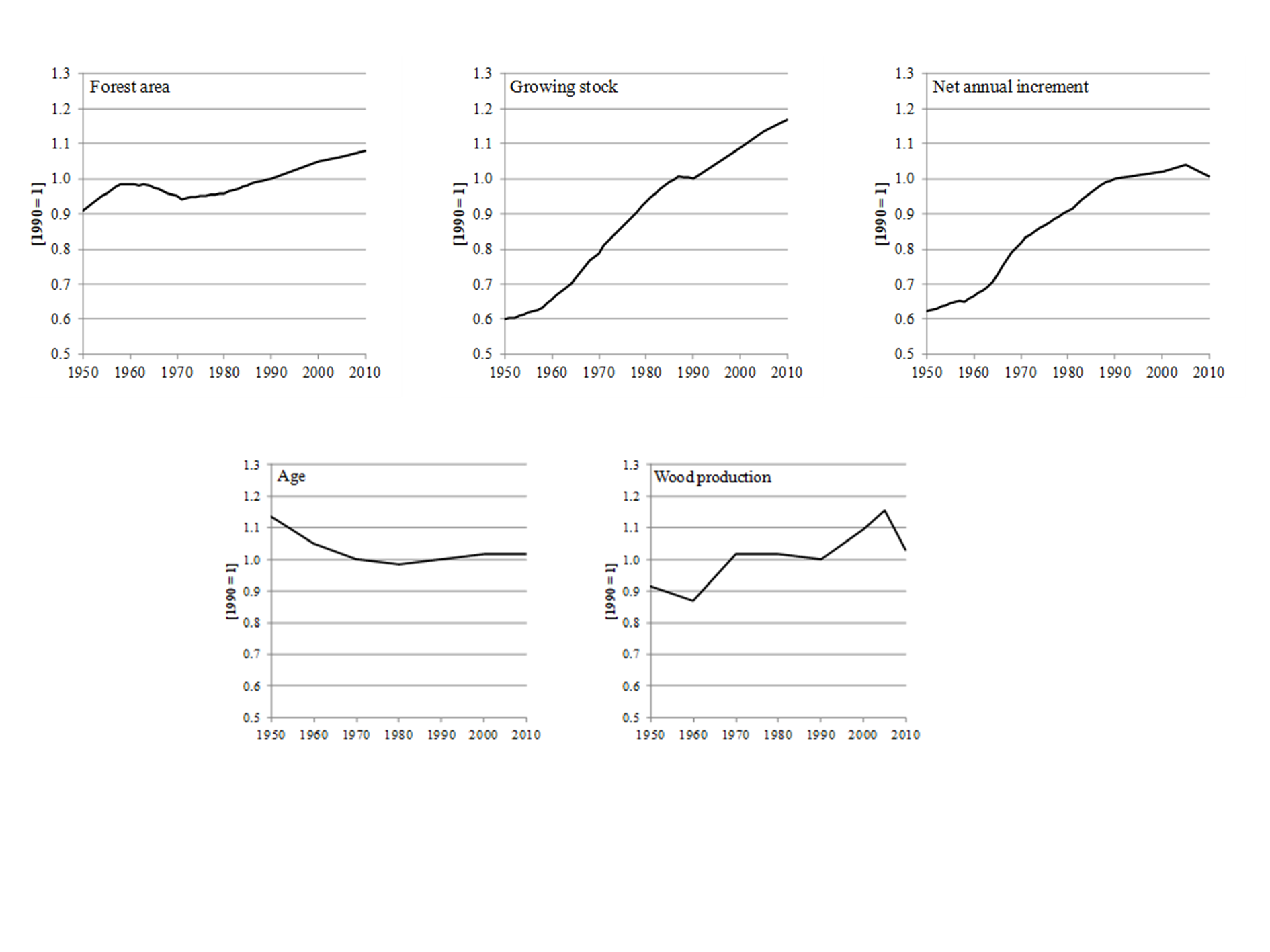 The rate of wood harvesting has also been increasing over recent decades, but at a slower pace than the increase in wood increment. Currently, about 75% of the net annual growth is felled, but with a large variation across regions (Levers et al., 2014). As the annual increment exceeds fellings, the amount of wood and biomass standing in Europe’s forests has been increasing continuously since the end of the Second World War. As a result, European forests have been acting as a carbon sink for decades, i.e. they have removed more carbon from the atmosphere through photosynthesis than the amount that was released back to the atmosphere through decomposition and burning (Nabuurs et al., 2013; Nabuurs et al., 2003; Goodale et al., 2002).

Wood production is an important forest function and wood removals from all EU forests reached 497 million m3 (under bark) in 2019. However, European forests are managed for a range of purposes and objectives. Some European regions are managed with the main aim to produce wood, while other regions have other objectives besides wood production (Hengeveld et al., 2012; Nabuurs et al., 2019). Since the 1990s, there has been a trend towards more close-to-nature silviculture and nature-oriented forest management, although this is implemented in many ways. While in the past, forests were predominantly managed as simple, evenaged- forests, management nowadays aims to increasingly develop more structurally rich forests. Clearcutting with tree retention (typically 5-10 trees per ha) is still the dominant cutting regime especially in the north of Europe, but there is a move away from clearcutting towards small-scale harvest and selective cutting of individual or groups of trees, especially in Central and South-Eastern European countries. When clearcutting is applied, harvesting cycles can go from 10 to 30 years in the case of fast-growing species (poplar, eucalyptus, some pine or spruce species), but typically exceed 80 years, ranging up to more than 200 years in Central Europe.

Tree species selection is another major management choice. For centuries, land managers, including foresters, favoured relatively few tree species for timber and fuelwood production, as well as other amenities. As a result, European forests deviate substantially from the potential natural vegetation. However, a shift towards a larger share of broadleaved species can be observed, especially in Central Europe. Motivated by the realization of the susceptibility of coniferous forests to storm, wildfire and insect outbreaks and climate change, forest managers have been increasingly favouring broadleaved or mixed species since the 1990s.

Tree species composition is, however, not always a direct management choice. Especially in southern Europe, forests have been established in recent decades through natural forest expansion following the abandonment of agricultural practices. The tree species composition of such forests is determined, amongst many other factors, by the availability of seeds and the ability of species to reach and occupy new sites. Also, high ungulate densities often lead to failures of deciduous species as they are selectively browsed by e.g. roe and red deer populations. Furthermore, the historical expansion of agriculture typically occurred on fertile and easily accessible areas. The forests and tree species that remained are typically those species that can grow on less fertile soils or in harsher conditions.

Why were Scots Pine and Norway Spruce planted outside their natural range historically?