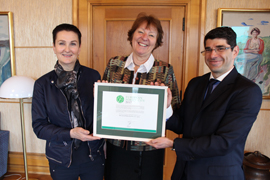 On 9 March 2017, EFI Director Marc Palahí presented Marianne Borgen, the Mayor of Oslo (in the middle), and Gerd Robsahm Kjørven, Director for Agency for Urban Environment, with a certificate to mark Oslo's nomination as European Forest City 2017. In her speech Mayor Borgen said: "We are honoured to receive the European Forest City award. We are very proud that the forests of Oslo are being recognized."

The forests around Oslo are known by the locals as well as visitors as Oslomarka. The forests once used mainly for timber have become an important part of the everyday life of the entire community. During the winter months, the forests have more than 350 km of ski tracks with up to  10 000 visitors daily. The recreational activities vary with the seasons: hiking, picking berries and mushrooms, as well as fishing and biking are among the most popular ones.

Mayor Borgen also pointed out that Oslo is sometimes called "the blue and the green – and the city in between" because of its proximity to the Oslo Fjord and vast surrounding forests. "You can experience both the vibe of the city centre and go skiing in the forests – all on the same day. You can even get there by subway. Oslomarka is in other words a big part of Oslo's identity and this award is very much appreciated", she concluded.

EFI key partner for Reconstructing the future for people and planet

EFI’s Director Marc Palahí met the President of the European Commission, Dr. Ursula von der Leyen at the conference “Reconstructing the future for people and planet” held on 9-10 June at the Vatican
Learn more 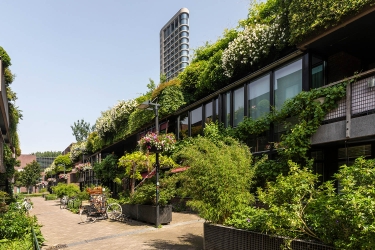 Toward Re-Entanglement: A Charter for the City and the Earth

EFI’s Director Marc Palahí is one of the authors of a new Charter which calls for a radical reimagining of the ways we organize, construct, and inhabit our buildings and cities. Toward Re-Entanglement
Learn more

EFI met civil and scientific community in Barcelona on Wednesday 23 March to celebrate the European Forest City 2022 award. The award recognizes the management of green spaces in the city, which
Learn more
See all