What role do forests play in the water cycle?

Clean, fresh water has become a key asset of the 21st century, becoming ever more expensive and increasingly becoming a source of conflict (e.g. Gleick 2014). On the one hand, increasing world population and in most places rising per capita consumption drive a continuous rise in demand. On the other hand, global environmental change is further enhancing water scarcity, including climate change induced dry spells and land conversions that reorient rainwater allocation away from green water production toward faster surface runoff. Together these trends are leading to chronic shortages of these valuable resources, both worldwide and across Europe. Among the countries with a critical freshwater balance worldwide, we note several European countries, such as Belgium, Cyprus, Greece, Italy, Portugal and Spain (Reig et al. 2013).

Against this background, forests play an essential role in the stable provision of clean, fresh water and many other water-related ecosystem services, such as flood and erosion protection and climate regulation (Table 1). Additionally, next to all the things we have known about forest-water interactions for many years, the last decade or two of research have reinvigorated our understanding of the role forests play in recycling and transporting valuable water resources toward continental interiors (Ellison et al 2017; Creed and van Noordwijk 2018; Keys et al., 2016; Wang-Erlandsson et al., 2018; Ellison et al., 2019). In fact, with significant tree, forest and vegetation cover loss, downwind continental interiors are likely to suffer the consequences of declining rainfall and water availability, thereby further heightening the threat of drought and wildfire.

The explanation for these multiple water-related benefits that forests provide can be found in the ecosystem structure and function of forests and a good understanding of the plant-water relationships of trees.

Trees have a higher leaf area index (i.e. the total area of leaf surface per unit of ground area) than other vegetation, typically 4 m2 of leaves per m2 of soil in European forests (Verstraeten et al., 2005). This implies that their canopies are more effective at intercepting rain, and tempering, together with their intensive rooting, the rain’s erosive forces. Trees also provide a more shaded and humid microclimate that mitigates climate change effects (Zellweger et al., 2020).

Trees have deeper roots than other plants (Jackson et al., 1996), which implies they can access and pump up larger soil water volumes for transport to the leaves for transpiration and growth. A big oak tree transpires up to 1600 litres of water per day during the vegetation period. European forests transpire about 400 mm per year, or roughly half of the average rainfall. Trees combine this higher transpiration rate with a relatively high water productivity (amount of biomass produced per litre water transpired, in g/l), which makes them fast and efficient biomass producers.

Higher transpiration rates, together with higher interception rates, result in trees having more evapotranspiration than other vegetation types (Verstraeten et al. 2005). The energy needed to evaporate all that water is withdrawn from the environment and leaves the system as embedded latent heat. Trees and forests thereby have a pronounced cooling effect on their environment that can easily amount to a 5-10 °C reduction in surface temperature (temperature measured at the surface of the sun-exposed canopy) (Maes et al. 2011, Hesslerová et al. 2013).

The exact role of forests in the water cycle has been much debated. In the eldest literature forests were described as “sponges”, emphasizing the water absorption and buffering capacity of their crowns, roots and soils, moderating flooding and balancing river flows. Early observations suggested this effect was limited and context-dependent (Bruijnzeel, 2004). Experimental catchment studies provided consistent evidence for “evaporative loss”, causing a reduction in total water discharge to rivers following afforestation (Bosch and Hewlett, 1982). This resulted in a widespread blue water paradigm. Blue water is that part of rainfall that reaches aquifers, rivers and lakes following surface run-off or groundwater recharge (Figure 1). The blue water paradigm emphasizes the importance of maximizing total water discharge to rivers and aquifers in the interest of human water use (e.g. for drinking water, agricultural irrigation water, industrial water use, etc.) and defines global forest restoration as harmful to this goal. 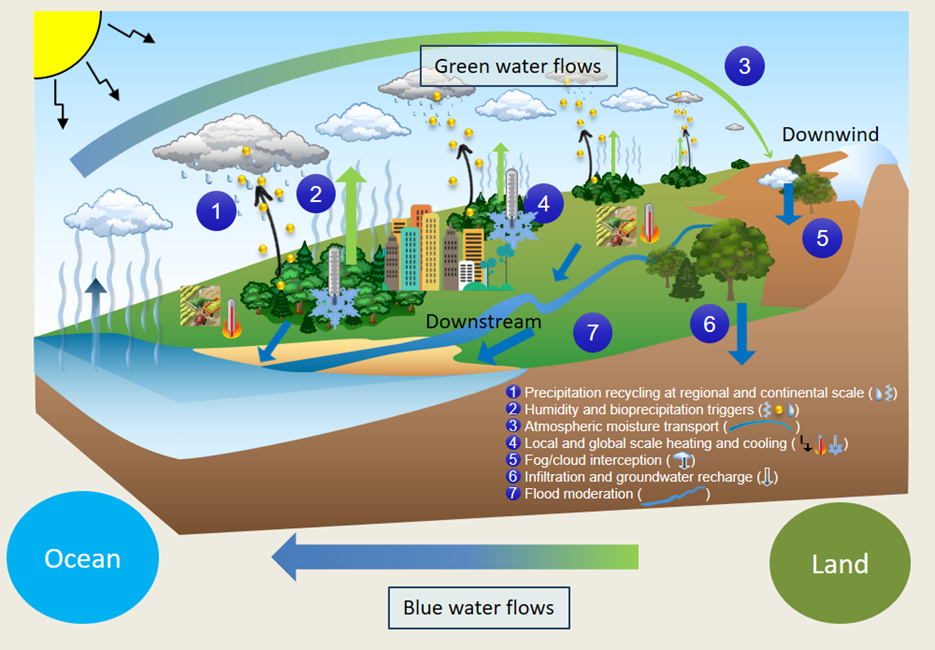 Figure 1: Green and blue water flows in the landscape. Green water is the water that is intercepted or taken up by plants and returned to the atmosphere by evapotranspiration. Blue water is the water that runs off or percolates and ends up in aquifers, rivers and lakes. The individual water cycle processes that are enhanced by trees and forests are enumerated in the legend (modified after Ellison et al., 2019; and Falkenmark and Rockström, 2005).

However, in the last decade or so the recognition of the importance of the green water related ecosystem services of forests has increased. Green water is that part of the rainfall that is evaporated back to the atmosphere through plant uptake and transpiration, or through evaporation from leaf surfaces, soil and water surfaces (Figure 1). Today, a more integrated approach has been adopted, emphasizing the multiple benefits generated by forests, which can be green water related, blue water related, or mixed (Table 1), while recognizing trade-offs resulting from declining amounts of blue water (e.g. Maes et al., 2009).

In this sense, the precipitation recycling favored by tree, forest and vegetation cover represents one of the more important, yet in terms of management so far widely neglected, features of the hydrologic cycle. As our knowledge and ability to measure evapotranspiration continue to improve, we expect to learn even more about these complex aspects of global freshwater provisioning.

Governance of the Forest-Water Nexus

Thus far, however, DSS models do not assess the larger-scale regional and continental precipitation recycling relationships. As a consequence, current DSS modelling tends to favor catchment-centric decision-making, which may be at odds with downwind impacts: the focus on demand-dominated water interests typically favours reduced evapotranspiration and increased downstream water availability. Downwind communities, on the other hand, will tend to favour the upwind production of evapotranspiration.

In conclusion, the further development of DSS and governance systems can help address synergies and trade-offs between ecosystem services, including the production of green and blue water, and contribute to forest restoration and adaptive forest management. But currently, these systems lag the evolution of scientific knowledge. The modification and adjustment of forest and water modelling systems and governance frameworks is therefore necessary to adequately address both catchment-based and regional to continental scale precipitation recycling dynamics (Ellison et al., 2017; Creed and van Noordwijk, 2018).

Bosch, J. M. & Hewlett, J. D. (1982). A review of catchment experiments to determine the effect of vegetation changes on water yield and evapotranspiration. Journal of hydrology 55(1-4), 3-23.