Members of the  EFIATLANTIC and IEFC network explored the role of alternative species as a means of increasing resilience in the forests of Atlantic Europe at their Annual Meeting in Scotland from 9th to 11th May this year. 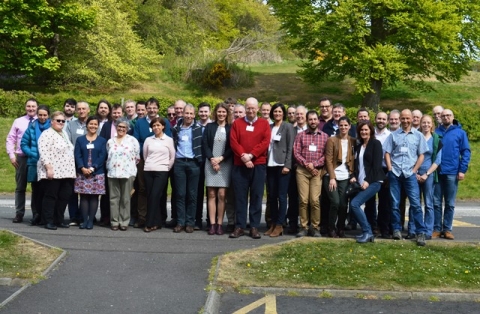 The event started with a business session in Edinburgh which reported on all the projects and publications worked on by EFIATLANTIC team in 2016, with the support of other units and its networks, such as IEFC, REINFFORCE, GEFF, EVOLTREE and the IUFRO Taskforce on Sustainable Planted Forests for a Greener Future. It was clear from this session that the network is very active in the field of resilience, being involved in initiatives related to risk management and genetics in planted forests. As a consequence of the new EFI strategy on bioeconomy and related to the need for a better understanding of end user expectations from our forest products, the unit is engaging more and more in bioeconomy subjects.

Examples include developing close partnership with clusters such as XYLOFUTUR or analysing how wood from planted forests is transformed in the BENCHVALUE project. This session also provided partners with a chance to network and identify future opportunities, and to consider the future role of the regional office within the re-organisation of EFI.

The implementation of the new EFI strategy was also discussed in order to identify the main topic to be covered by the unit in future: participants reached a consensus that this should continue to be on the topic of “planted forests”.

Hosted and co-organised by network member Forest Research, with financial support from Forestry Commission Scotland, the one-day scientific seminar considered how the use of alternative tree species might help to achieve more resilient forests now and in the future.There were around 50 participants at the event from seven countries, including researchers, policy makers and practising foresters.

The meeting coincided with a period when Scotland is seeking to expand and further invigorate its forest industry: in 2016, the Scottish Government undertook a consultation on the Future of Forestry in Scotland confirming that climate change and species selection are key issues to address.

Members of EFIATLANTIC and IEFC have done a significant amount of work to address species choice and future forest management, including the REINFFORCE project, a focus for alternative species work. In the afternoon, network partners updated colleagues on progress made by specific projects in an open session. Details of the presentations can be found below this article, but among the highlights were:

The seminar was followed by a rare opportunity to visit forest sites and experiments in the West Coast of Scotland and consider future species selection and silviculture at some unique forestry locations. Tour participants noted that some species such as Eucalyptus nitens, Pinus peuce and big-leaf maple (Acer macrophyllum) are growing very well on warmer coastal areas in Scotland, but may not be sufficiently hardy to be considered as an alternative species on colder inland sites.The field trials visited during the tour provide a very good opportunity to assess the trade-of between wood production and resilience.

In conclusion, this event reminded participants about the complexity of the interactions that occur between climate change, pest and diseases, and forest species.It confirmed that in the context of climate change there are no simple answers when it comes to substituting species and that in terms of mitigation, it will be necessary to invest significantly in adaptation research to avoid major problems, such as the severe outbreak of Dothistroma needle blight on Corsican pine in the UK.

Better knowledge on the true potential of tree species and a standardised and collaborative effort on species characterisation are required, as well as the harmonised and worldwide monitoring of the spread of pests.

EFIATLANTIC would like to thank event host Forest Research (in particular Bill Mason and Evelyn Hall) and the Forestry Commission Scotland for their valuable support in organising this event.

Wednesday, 5 October 2022 The young scientists took the EFI Annual Conference by storm with a slick and sophisticated session on Climate-Smart Forestry (CSF). Through the diverse presentations of
Learn more

EFI is offering an opportunity for Ukrainian researchers to develop their capacities in the field of forest monitoring. Five grants of 30,000 EUR from the EFI Network Fund are available to Ukrainian
Learn more

EFI is providing an opportunity, including financial support in the amount of 750 euro, for Young Scientists in the field of climate-smart forestry from EFI Associate and Affiliate member
Learn more
See all