Who owns the forests and how are they managed?

European forests belong to around 16 million private and public forest owners. In the EU, about 60% of the forest area is privately owned and 40% public. Public forests are owned by municipalities, regional or national governments, the latter are often regarded as “state forests”.

Owners of private forests may be traditional, non-industrial types of private ownership including families, farms, rural commons, churches and aristocratic estates. Industrial private owners include forest industry companies, e.g. those producing pulp and paper. There are also specific types that are not fully private or public, such as commonly owned forests by local citizens or farm holdings that go back to historical ownership forms when parts of the forest resources where commonly used and managed by local communities. There are also newer examples triggered by social movements where forests are acquired jointly by local groups to be managed for community benefits.

Overall, property sizes range from below one hectare to up to several millions of hectares. However, almost 90% of private forest holdings are smaller than 10 hectares, many are even much smaller. Especially in some Eastern and South Eastern European countries, the private forest holdings are only around 1 ha in average across the whole country (Bulgaria, Serbia, Croatia, Poland). Large forest estates may belong to public governments, churches, aristocrat families or foundations, or industrial companies or investors (UNECE and FAO, 2020; FOREST EUROPE, 2020; Pulla et al., 2013; Weiss et al., 2019; Ficko et al., 2019).

Due to the different historical, legal and social circumstances, patterns of public and private ownership vary greatly across Europe. For example, in Northern Europe, around 70% of the forests are privately owned, while in South East Europe around 90% are public. While private ownership clearly dominates in western European regions, it is the opposite in Eastern Europe (see Figure 1). Furthermore, the extent of property rights granted to owners by the specific national legal frameworks differs strongly, with a gradient of a greater freedom of owners in forest management in Western European countries and more legal restrictions in Eastern Europe. In all countries, forest laws aim for the preservation of forest land as forests and for their sustainable management. Differences mostly relate to the freedom of the owners in management planning and deciding on tending and harvesting measures, and vice versa, the extent of supervision by the authorities (Nichiforel et al., 2020). 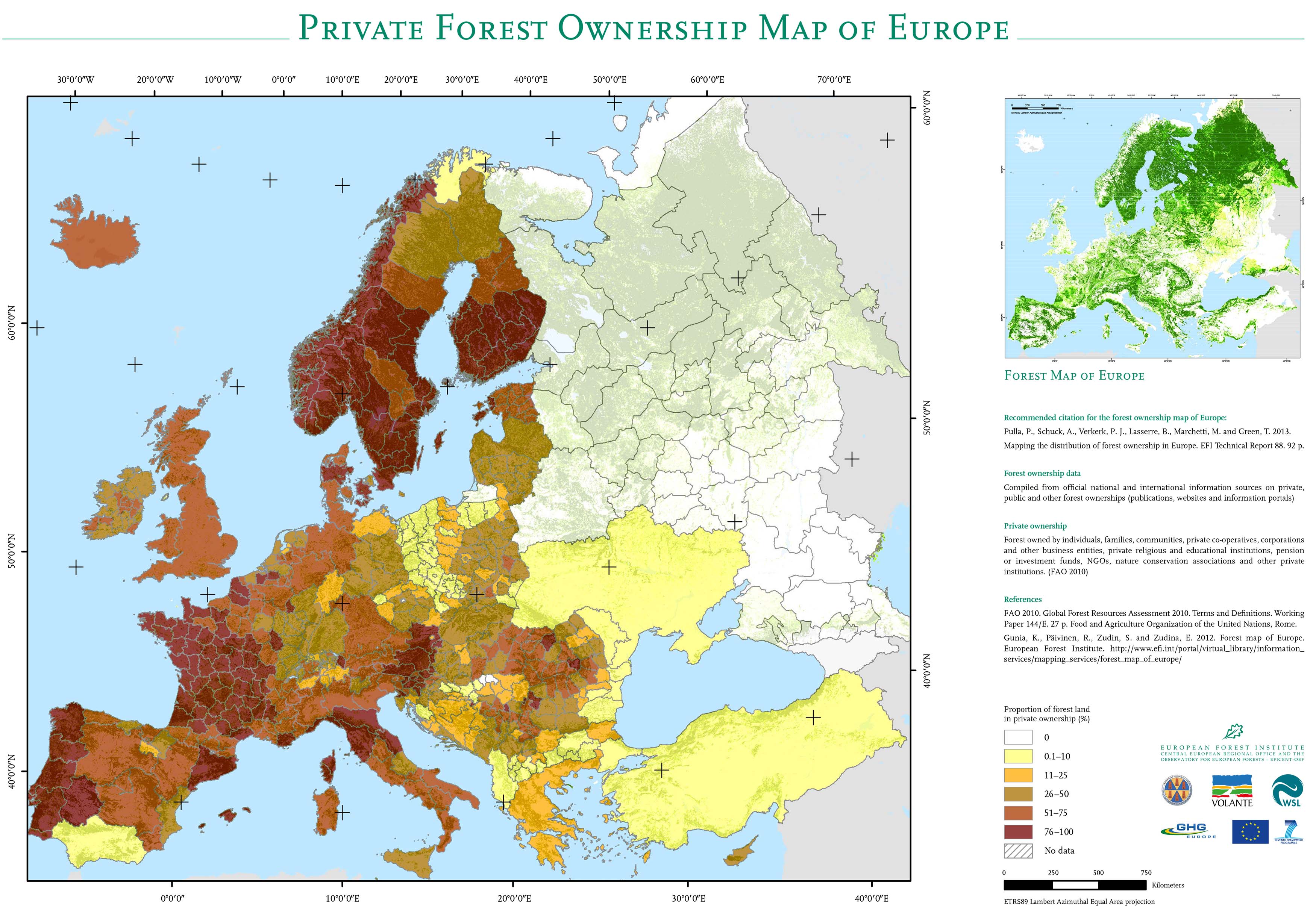 Forest area is increasing in most countries in both public and private ownership categories, mostly due to afforestation. One of the major changes of ownership in the last decades has been the restitution of nationalized land to its former municipal, church or private owners in most Eastern European countries after the system change 30 years ago. In most former socialist countries this has been a long process which in some countries is still not finished (UNECE and FAO, 2020).

Multiple societal and political developments lead to various types of changes in ownership patterns, like structural changes in agriculture, urbanization, changes in lifestyles, as well as restitution, privatization and decentralization. When small farms are given up, the agricultural land is usually sold to other farmers, but forests are often kept in the family and become owned by non-agricultural owners with urban lifestyles. Privatization of state forests to private owners has been happening in several European countries, particularly in the Baltic States. A decentralization of state forest management has occurred in some South Eastern European countries and in the UK where also the legal responsibility was given to the regional governments.

The issue of forest ownership has recently received growing attention in research and policy (Weiss et al., 2019; Ficko et al., 2019). There is increasing awareness that for a number of unsolved current issues in forest policy and management the behaviour of the owners is a crucial factor. This is true for the policy aim in many countries to utilize better the sustained yield of wood from the forests as raw material for the forest-based industries. The values and goals of forest owners are similarly relevant when it comes to biodiversity conservation, particularly in integrated conservation concepts that aim to combine timber production and nature conservation. Finally, the challenges of the changing climate require a relatively fast reaction of the owners in adapting their forests to new climatic conditions.

The goals and motivation of forest owners to manage their forests vary substantially, depending on the forest size, their connection to their property, their preferences regarding economic, environmental and social values, and their flexibility to respond to market trends. The regional setting and infrastructure (e.g. is there forest-based or energy industry using wood) is also likely to have a major impact. Therefore, the type and size of forest holdings and the regional setting impact on the way forests are managed and on the products and services provided to society. While state forest owners generally actively manage their forests according to political, societal and business objectives, there is a wide variation in private forests, especially in small-scale forest ownership. This may range from active market participation to self-subsistence from forest products, a reserve for family investments, altruistic motives to no management at all. Especially owners of very small properties often lack the knowledge, skills, capacities and interest in forest management. An important aspect is the urbanisation of owners, i.e. the little or non-existing connection of those owners to their forests, some living far from their forest, some not even knowing that they are forest owners. This is true both for Western European countries (e.g. inherited forests owned by urban people) and for Eastern European countries where owners of restituted forests often lack bonds to their re-owned properties.

It is therefore important, but also difficult to reach forest owners for common forest policy goals, in particular the more fragmented forest ownership becomes. Fragmentation often leads to economic inefficiency in forest management (higher harvesting and transaction costs), disincentives for investment in sustainable forest practices, and greater management problems related to the provision of ecosystem services, including wildlife, water, recreational opportunities and soil protection. A lack of active management for timber production may imply growing biodiversity values of the forests, but it may also imply increased disturbance risks such as pests and diseases, wind damage or wildfires. Various approaches are taken to address these disadvantages, including incentives for joint management by smaller private forest owners which often takes the form of private forest owners’ associations, cooperatives, forest certification initiatives and support by advisory services. These structures aim to support private forest owners through providing joint interests representation and/or accessing services for forest management and timber marketing. Some of those have a long tradition, some are new and innovative, and there are considerable geographical and cultural variations in the forms and roles of those organizations (UNECE and FAO, 2020).

The diversity of forest owners is often seen as a hindrance for reaching forest policy goals, but it represents also a richness since a mosaic of management approaches (e.g. biodiversity at landscape level) can increase the resilience of forests and help to provide a more diverse set of forest ecosystem services than with “uniform” forest owners. Income generated by forest use spreads to a large number of families and individuals in society (often different from income generated from e.g. coal, oil or gas resources). (See Question 9 on the contributions of forest management to regional economic prosperity and employment).

The interactions between ownership type, forest management approach and policy, are of fundamental importance in understanding and shaping forestry, but existing knowledge on forest ownership in some EU regions is quite limited in official figures as well as in research. For instance, differing national statistical and accounting systems, which are rich in information, would require translation and calibration to enable cross-country comparisons. In contrast to the existing good understanding of the behaviour of traditional forest holders, in most countries there is much less knowledge about other forest owner types with their specific motives and preferences.